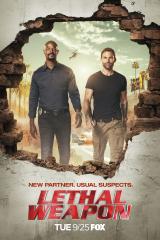 Genre: Action,Crime,Drama
Network: FOX (US)
Release date: September 21, 2016
External link: TheTVDB
Summary:
Grief-stricken ex-Navy SEAL-turned-detective Martin Riggs moves to California to “start over” at the LAPD. He’s paired up with Roger Murtaugh, who’s just coming back to the job after a near-fatal heart attack. Riggs’ penchant for diving headfirst into the line of fire immediately clashes with Murtaugh’s prudent, by-the-book technique. By the time their first investigation ends, Riggs realizes he may have found something worth living for – a partner and friend, Murtaugh. And even Murtaugh figures this arrangement might just work out after all. If only Riggs doesn’t get them killed first…

There Goes the
season 01
episode 04

Get the Pictur
season 03
episode 05

What the Puck
season 03
episode 08

There Will Be
season 03
episode 10

The Roger and
season 03
episode 12