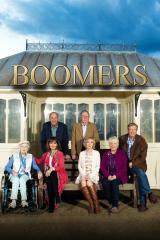 Genre: Comedy
Network: BBC One
Release date: August 15, 2014
External link: TheTVDB
Summary:
Boomers follows the ups and downs of three couples living in Thurnemouth, 'Norfolk's only west-facing resort'. There's Alan and Joyce, who are coming at retirement from very different directions; Alan wants to slow down, Joyce wants to speed up. Alan tries to avoid as many of Joyce's social commitments as possible, but downsizing to a bungalow has meant there are fewer places for him to hide. John and Maureen, living in their gadget-filled dream house, are adventurous in every aspect of life including the bedroom. For them, 60 is the new 40. However, there's a reminder of what's around the corner with Maureen's ever-present mum Joan. And finally there's Trevor and Carol, who've got non-communication down to such a fine art that if Carol spent a weekend away, Trevor might not even notice.

The Not Retire
season 01
episode 04