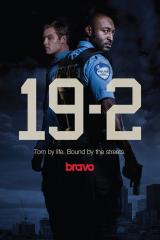 Genre: Drama
Network: CTV
Release date: January 29, 2014
External link: TheTVDB
Summary:
Character-driven drama, 19-2 revolves around the day-to-day life of two unwilling partners of the Montreal Police Department, Officers Nick Barron and Ben Chartier. These two beat cops patrol the urban sprawl of downtown's 19th district, in cruiser No. 2. 19-2 is about the tensions and bonds that develop between two incompatible men of very different temperaments and life experiences. Over time, Nick and Ben's mistrust and antagonism for each other give way to moments of mutual respect and a wavering chance at a true partnership. As Season 1 progresses, we also get to know the tight-knit squad of 19. We see friendship and enmity, loyalty and betrayal. The series delivers in portraying the unpredictability and fragility of the world of a beat cop through moments of life-threatening intensity to its characters, both on and off duty, cementing 19-2 as a powerful character study and a gripping police drama.