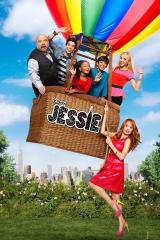 Genre: Children,Comedy,Family
Network: Disney Channel (US)
Release date: September 30, 2011
External link: TheTVDB
Summary:
Jessie is an 18-year old girl from a rural Texas town who moves to New York City. She suddenly finds herself becoming the nanny of four children living in a multi-million dollar penthouse in a hotel after being pushed out of a taxi. One of the youngest children just asks her to be her nanny and now Jessie has to get them to get along by keeping them from fighting. One of the children has an imaginary friend and another has a pet water monitor lizard. Assisting her is Bertram, a mean, lazy butler and Tony, a 20-year-old doorman who secretly likes Jessie.

Are You Cooler
season 01
episode 10

The Princess a
season 01
episode 13

All The Knight
season 02
episode 16

The Rosses Get
season 03
episode 06

From the White
season 03
episode 13

Between the Sw
season 03
episode 21

There Goes The
season 03
episode 24

But Africa Is
season 04
episode 01

Someone Has To
season 04
episode 15