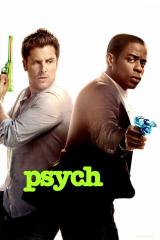 Genre: Comedy,Crime,Drama
Network: USA Network
Release date: July 07, 2006
External link: TheTVDB
Summary:
Thanks to his police officer father's efforts, Shawn Spencer spent his childhood developing a keen eye for detail (and a lasting dislike of his dad). Years later, Shawn's frequent tips to the police lead to him being falsely accused of a crime he solved. Now, Shawn has no choice but to use his abilities to perpetuate his cover story: psychic crime-solving powers, all the while dragging his best friend, his dad, and the police along for the ride.

Forget Me Not
season 01
episode 09

From the Earth
season 01
episode 10

The Greatest A
season 03
episode 04

Any Given Frid
season 03
episode 13

Shawn Has the
season 04
episode 05

Not Even Close
season 05
episode 03

Chivalry Is No
season 05
episode 04

Shawn and the
season 06
episode 12

No Country for
season 07
episode 04

No Trout About
season 07
episode 14

Cloudy with a
season 08
episode 03