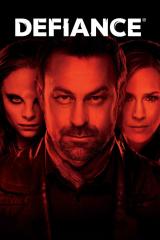 Genre: Action,Drama,Science-Fiction
Network: Syfy
Release date: April 15, 2013
External link: TheTVDB
Summary:
Set on a future Earth, Defiance introduces players and viewers to a world where humans and aliens live together on a planet ravaged by decades of war and transformed by alien terra-forming machines. It centers on Jeb Nolan, the law-keeper in a bustling frontier boomtown that is one of the new world’s few oasis of civility and inclusion. Nolan is a former Marine who fought in the alien conflict and suffered the loss of his wife and child in the war. The trauma transformed him into a lone wanderer in the wilds of this new and dangerous world.

Past is Prolog
season 01
episode 11

Everything is
season 01
episode 12
Season 02

The Opposite o
season 02
episode 01

Bottom of the
season 02
episode 10

Where the Appl
season 03
episode 06

The Beauty of
season 03
episode 07

Upon the March
season 03
episode 13