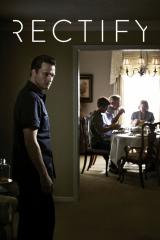 Genre: Drama
Network: SundanceTV
Release date: April 22, 2013
External link: TheTVDB
Summary:
Rectify follows the life of Daniel Holden upon his release from jail after serving nineteen years on Georgia's Death Row before DNA evidence disputed the State's original case. Holden, who was only eighteen years of age when convicted and sentenced to die for the brutal rape and murder of a sixteen year old girl, returns to his family and to his hometown where the murder occurred and where many still believe he is guilty. Daniel spent all of his adult life waiting to die. Now he must learn how to live again or decide if he even wants to while others choose whether or not he will have that chance.

Donald the Nor
season 02
episode 04