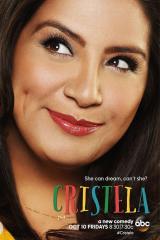 Genre: Comedy
Network: ABC (US)
Release date: October 10, 2014
External link: TheTVDB
Summary:
The series chronicles the life of a Mexican-American law school graduate living in Dallas, who must balance her chance to live the American Dream by working as an unpaid intern at a law firm with the concerns of her family, including her sister (a call center manager at a cable TV company who wants her to get a real job), her brother-in-law (who sees her as a freeloader and wants her to move out), and her mother (who wants her to settle down).